When it comes to finding ways to make money online or increase your overall income, it’s often best to turn to tried and true methods.

I’ve tried a variety of money making experiments over the years, and honestly, most of them weren’t a success. From starting a dropshipping store to selling POD items on Etsy, I’ve had my share of botched entrepreneurial attempts.

In contrast, my two most successful ventures have been starting this blog and getting into freelance writing. These side hustles aren’t anything special, and I’m not trying to reinvent the wheel or hop on to the latest fad: I just write content and monetize it accordingly.

What I love about this particular Young Money interview and Nate and Alysha, our awesome entrepreneurs, is that they are also leveraging one of the oldest economic principles to make a killing: arbitrage.

They made a business plan, tested proof of concept, worked on scaling, and have even crossed the million dollar mark with their Amazon FBA business and taken the business full-time.

If you’ve ever wanted to make money with retail arbitrage or to learn more about how this business model works, you’re going to want to read this one through the end.

If you’ve missed the previous interviews in this series, I highly recommend giving them a read.

If you’re caught up, get ready to learn about the incredible world of Amazon retail arbitrage! 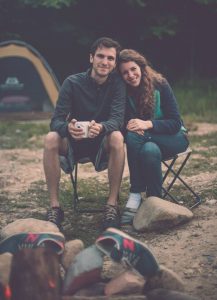 We have also turned $100 into over $1 million in sales by using retail arbitrage.

Nate is known around Orlando as “the bra guy,” and has spent an incredible amount of money on bras to resell.

In our free time, we take our children to Disney, go hiking, and run a free Facebook group for Amazon sellers called Hustle Buddies.

We also run a YouTube channel that shares useful tips and tricks for Amazon FBA and making money with retail arbitrage.

What Is Retail Arbitrage?

Arbitrage involves buying and selling assets in order to turn a profit by taking advantage of price discrepancies on different marketplaces.

By sourcing products from major retailers like Walmart and other big box stores, you can turn a profit by selling those same items on online marketplaces like Amazon where there might be a price discrepancy that works in your favor.

What Side Hustle Did You Start?

As teachers, we tried a lot of different side hustles to bring in extra income.

However, one day I (Nate), stumbled upon the concept of Amazon FBA and we’ve never looked back.

When we started Amazon FBA as a side hustle, we quickly realized the potential for it to become our full-time income source if we put in the hard work and stayed focused on our goals.

We do what’s called “retail arbitrage” through Amazon’s FBA program, which is where we purchase merchandise from local retail stores and resell those items on Amazon for a profit.

For example, we will go to Kohl’s and purchase bras that have been marked on clearance, stack discounts, and then sell them on Amazon for a profit. 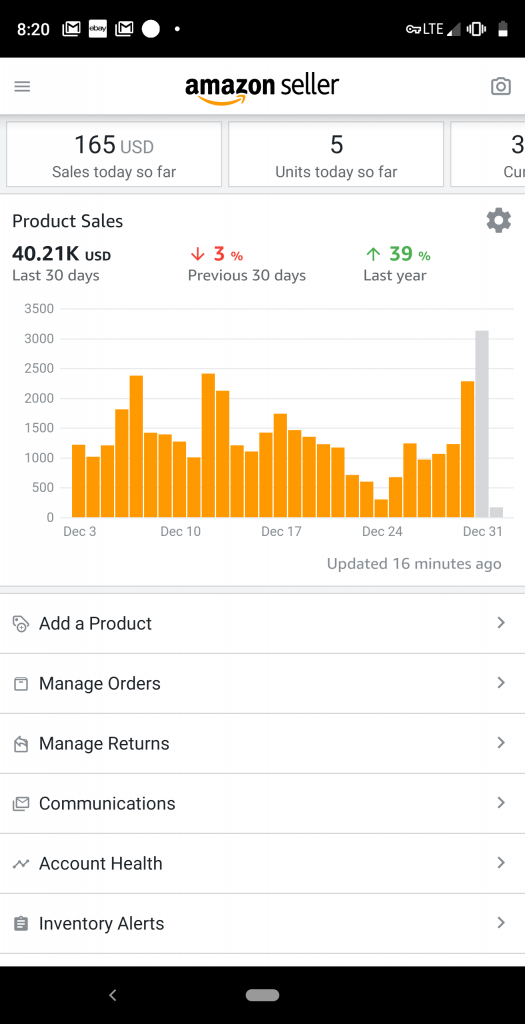 Here’s a snapshot of our amazon FBA revenue for the last 30 days.

How Did You Discover Retail Arbitrage?

Retail arbitrage was on a long list of potential side-hustles, but when we looked into it, we realized how scalable it was, and how we could grow it into a viable business.

We knew a lot of people that had sold on other platforms like eBay, but at the time we lived in a small apartment, and we simply didn’t have the time or space to store and ship all of our products to customers.

However, the fact that you don’t have to deal with storing your inventory or constant shipping hassles is what makes the FBA program so scalable and so appealing.

With Amazon FBA, you are stocking Amazon warehouses with your products, so they store all of the items before they sell, and then they ship them to customers when an order is placed.

FBA stands for “Fulfilled by Amazon”, because Amazon fulfills customer orders. This means that we can purchase $9,000 worth of bras, and then ship them out to Amazon warehouses the following day, where they will stay until a customer places an order.

Packing up our merchandise to ship off to Amazon warehouses!

Now, there are multiple methods for selling on Amazon and utilizing their FBA program.

The most common methods are:

While the other methods aren’t bad, they do take a substantial amount of starting capital, and the risk is much higher that your products could fail, especially for Amazon FBA beginners.

With retail arbitrage, we aren’t creating our own brand. We’re simply supplying customers with the items they are already trying to order at prices they are willing to pay. The Amazon listing already exists, so we’re just stocking their shelves.

You also don’t need a ton of money to do retail arbitrage.

When I (Nate) first wanted to try retail arbitrage, Alysha (my wife) was pretty skeptical that it would work.

I tend to be the dreamer, and she tends to be the realist. It’s why we make such a great team.

I had to prove to her that retail arbitrage was a viable business, so she told me that I could use $100 to try out Amazon retail arbitrage, and now that initial $100 has turned into full time incomes for both of us.

As I mentioned, we initially started out this business with just $100.

We also committed to not taking any income for ourselves so that we could keep rolling all profits back into our business.

We’ve now done over $1 million in sales, and in June of 2018, we quit our teaching jobs and started working from home, doing retail arbitrage full-time.

We also knew that we wanted to grow our family through foster care/adoption, so it was the perfect time to start working from home so that we could spend a lot of time with our children.

A few months later we became foster parents and are loving that we get to spend so much time with our two children.

During the process of growing our retail arbitrage income, we developed some really great relationships with local managers, and they will text me when they have great sales, which makes sourcing products much easier!

A challenge that was also a success was when we became foster parents.

We took a 3-month break from our business so we could completely focus on the kids and help them adjust, as well as us adjusting to being first-time parents!

While sales did slow down during this time, our business continued running smoothly. However, we did have to work hard after those months to regain momentum.

This challenge is really a testament to how your business can work for you if you have the right systems in place. 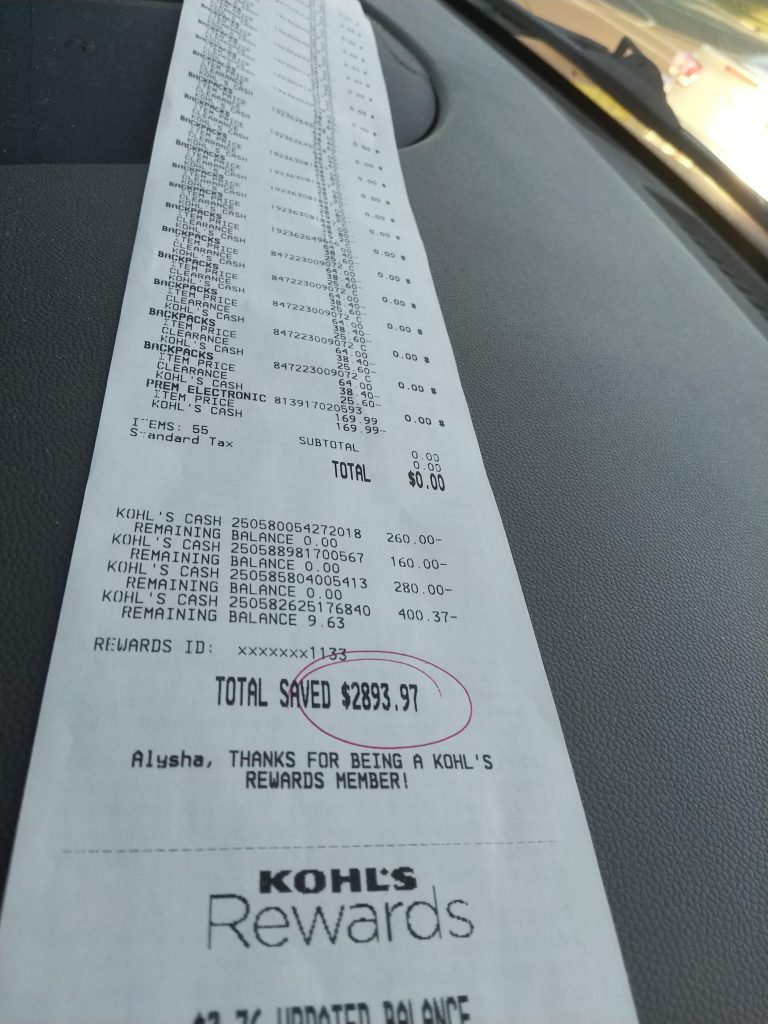 Saving almost $3,000 in future FBA merchandise thanks to Kohl’s Rewards!

In the future we plan to automate more and more. We’re currently making enough money to stay home with our kids, and that was a big goal of ours.

Now our focus is creating more time. Our next goal is to become financially independent and retire early within the next 6 years.

Tips For Anyone Looking To Make Money With Amazon Retail Arbitrage

Building and income to replace your day job does not happen overnight, and it won’t happen without sacrifices.

For our journey with Amazon, we worked 4-5 hours every day AFTER our day job teaching, and we weren’t taking any money from the profits, because we had that end goal in mind.

We worked weekends, nights, holidays, always pushing towards our goal.

All of that hard work allows us to now spend time with our children and have an incredibly flexible lifestyle. You need to be prepared to reinvest into your business in order for it to grow into something life changing.

All I’m going to say is wow: this has got be one of the coolest and most amazing stories we’ve ever had on Young Money.

What I love most about this story (aside from the amazing amount of revenue and their adorable dog) is the fact that Nate and Alysha took an incredibly rational and patient route to scale their Amazon FBA income.

I think it can be easy to get caught up in early signs of success with a business venture and to make the call to go all in.

While this can sometimes work out, in reality, most successful businesses require time and investment to scale.

Reinvesting their profits into their retail arbitrage business at such an early stage and putting in the effort to test out proof of concept (while still holding down full-time jobs) is both commendable and smart if you ask me.

It doesn’t matter if your side hustle is blogging, working in the gig economy, or ecommerce: make a game plan, take time to scale and test proof of concept, and flip the switch to full-time when the financials check out.

I’d also like to thank Nate and Alysha for sharing their story with This Online World.

I personally didn’t know much about the world of retail arbitrage, but their path to success has opened my eyes to an entirely different world of making a living online.

Be sure to checkout and follow both their Facebook group and YouTube channel! If you’re serious about making money through retail arbitrage, the Hustle Buddies Facebook group in particular is full of valuable information and tips, as well as other entrepreneurs making significant income through Amazon FBA.

Nate and Alysha are former public school teachers turned entrepreneurs. They managed to turn $100 into over $1 million in sales using retail arbitrage and selling on Amazon FBA.